What Kind of Waiting is Advent Waiting?

There’s more than one kind of waiting in this world. And one of my favorites is what I’ll call advent waiting.

There’s the kind of irksome waiting that feels like a waste of time:

Standing in line at the driver’s license office.

Stuck behind a dozen people with full shopping carts at the check-out line.

And there’s waiting that puts a knot in your stomach:

Expecting test results from the doctor.

Listening for your teenager to come home, way after curfew.

Hearing rumors of layoffs at your job.

In our organized society, where what we plan on usually occurs, we wait for many things with happy anticipation. Things like homecomings of loved ones, the arrival of a new baby, or a fun night out with friends. But in December, Christians can experience another type of waiting.

Advent Waiting: The Birth of a Living Hope

As Christians, we celebrate the birth of Jesus Christ with a time of waiting we call Advent. The Latin root of the word “advent” means “coming.” For four Sundays before Christmas, we capture both the longing and the hope for the coming of our Savior.

A video in my Sunday Bible study really impacted my thinking this year. The Bible Project’s excellent video on hope pulls out the meaning of a simple four-letter word in English, that can mean so much more. In the Old Testament, the two Hebrew words often translated as “hope” mean waiting, or waiting for something under a sense of tension. Biblical hope, the video explains, is different from optimism because Biblical hope is in a real living person, not in improvement of your circumstances at the moment. Our Biblical heroes chose hope in God even when they could not easily see any resolution to the challenges in their lives. They looked backward to God’s faithfulness in order to have hope.

The Biblical concept behind hope takes another leap in the New Testament. Believers in Jesus’s day hoped in a person too, but now that person was the Christ. And in Christ, the word hope goes global. It’s not just about hope for you personally, or your community. It’s about having a new “living hope” in a resurrected Christ, not just for daily sustenance, but for a renewal that happens to all creation, everything on earth.

That means, having a vision beyond your own skin-and-bones body and your own backyard. It means believing that with God’s strength you can change much more than your circumstantial situation. That is advent waiting. 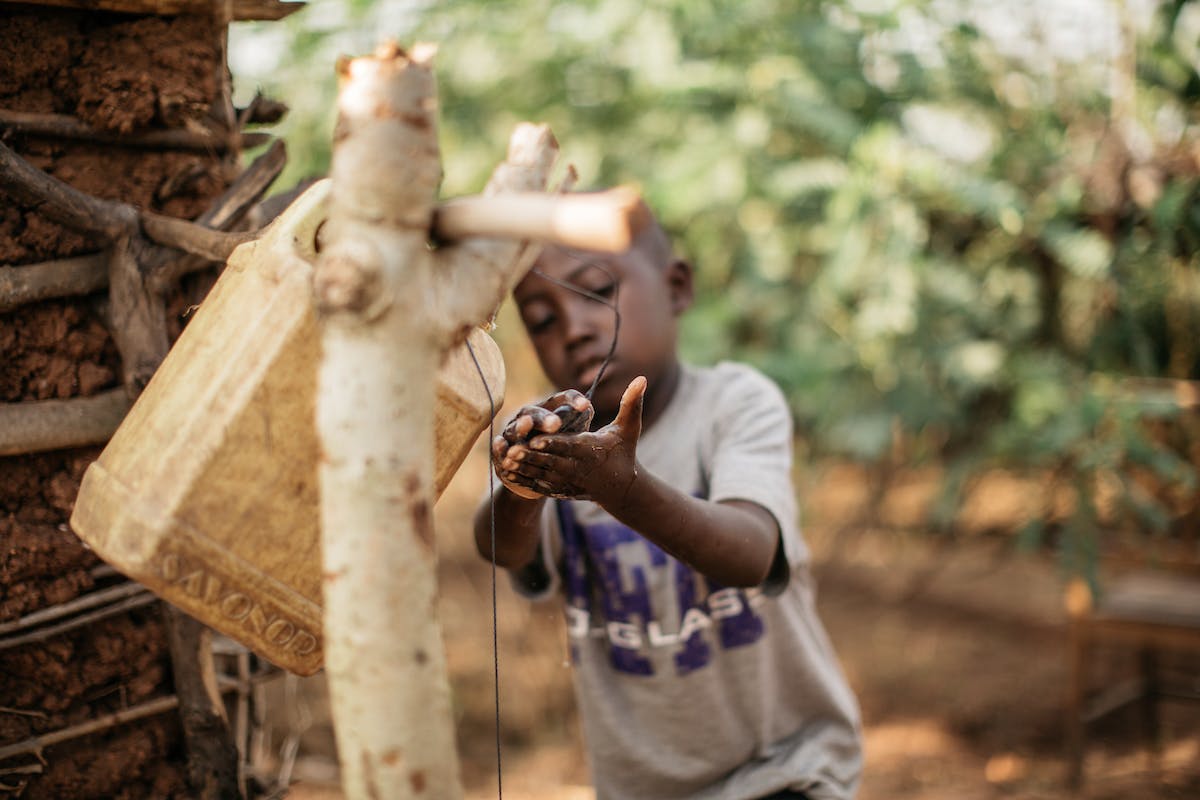 A little boy washes his hands in Burundi using a “tippy tap” made from a jerrycan. Handwashing is an important behavior change practice taught to avoid the spread of germs.

A Basin and a Towel…and Hope

In my work with Food for the Hungry, I visited Haiti shortly after the 2010 earthquake that devastated many areas. In the aftermath of the quake, cholera broke out. Everyone had to be very careful about what they ate and drank. Hand washing after using the bathroom became a primary weapon to stop the spread of this deadly disease.

We were traveling from the capital city, Port-au-Prince, to a town in the very interior of the island. We stopped midway at a large Christian organization to use their bathrooms, which we knew would be clean and sanitary. The facilities were indeed spotless. But what captured my attention was the elderly woman, no more than five feet high, who stood at the door to the ladies’ room. She held a handful of paper towels. As I exited the bathroom stall, she pointed with her chin to the sink, effectively blocking the door to the hallway. There were no words exchanged, but I knew a thorough hand washing was in my future. Or else.

So I washed for a while at the sink basin until it looked like I might pass muster, and then she handed me a towel. Only then did she back away from the door. She didn’t hurry me at all but waited patiently for me to finish.

I remember this woman when I think about hope. This woman hoped to ward off cholera for a whole nation’s worth of travelers who passed through her restroom. Like Jesus, she offered the basin and the towel to clean someone heading out to dirty work. She sent me out with a challenge to keep fighting the fight, in hope that wherever I went in God’s world, I wouldn’t take cholera with me. FH in fact trained tens of thousands of women like her on hand-washing, and did, in fact, prevent any significant outbreak of cholera in their communities.

Light a Candle in the Darkness

My household lights Advent candles. The first week’s candle is the Hope candle. What do you hope for? Are you willing to dream big, to hope for a transformed world? One where a small baby born in a stable changed everything?

Gift Guide: 10 Ideas for the Woman Who Cares