It’s 2021! And for Food for the Hungry (FH), that means a special invitation to you. Join us in celebrating a very special milestone. It has been 50 years since FH was started by founder Dr. Larry Ward! At FH, we believe that a 50th anniversary is a marvelous opportunity to reflect on five decades of history. Of serving people in poverty, growing as an organization, and seeking to see all people flourish — together. 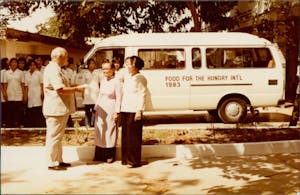 While on an international flight, Larry Ward found the Bible passage Psalm 146:7, which reads, “He [God] upholds the cause of the oppressed and gives food to the hungry.” This verse impressed on Larry Ward’s heart that a God who cares for suffering and hungry people must want His followers to do the same. In a world of poverty and hunger, Ward founded FH with the name “Food for the Hungry”  because he had a vision: to create an organization focused on responding to human suffering.

While much has changed over the last 50 years, that mission has remained central to FH. As FH’s understanding of the factors that cause, perpetuate, and mitigate poverty has evolved, our programs and approaches have changed. Yet the principle at FH’s founding remains the same and is represented in our mission today: To see an end to all forms of human poverty.

Starting in 1972, Food for the Hungry began responding to disasters in places like Bangladesh, Cambodia, Ethiopia, Honduras, Nicaragua, Romania, Rwanda, and Vietnam. This legacy of emergency response where it is most desperately needed continues to shape FH’s work today. In 2021, FH remains committed both to long-term development work in communities and to being present in the wake of natural disasters, humanitarian emergencies, and other emergencies. 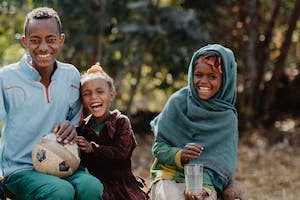 In the last 50 years, this has meant:

FH’s Role as Agents of Transformation

The faith behind FH’s work says that all people have the potential for development and transformation. God is present in all communities. Because of that, FH’s role is as agents of transformation. We share the Good News and connect families and communities to the resources, knowledge, and people that enable them to seize a brighter future for themselves and their children. 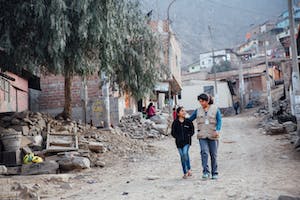 As we work to see relationships restored, FH’s role is to support community leaders, parents, teachers, and the most vulnerable in identifying and working toward their goals. When FH says we walk with communities, that means that we help them to see the gifts, assets, and potential that already exists. That’s not to ignore challenges. But it means that we start from the belief that every person, no matter their status or age or education, has something to offer. We also believe that it’s the people in communities who can recognize their own needs and opportunities. Once that happens, FH and our generous donors can step in to offer connections to outside resources, social support, or technical expertise to help communities accomplish their goals. 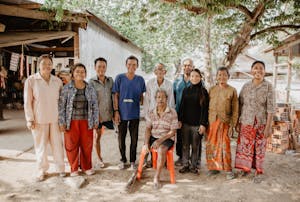 A group of people with disabilities in Cambodia formed a grocery store to meet a community need and provide them with income.

One major goal for FH is seeing communities grow in their ability and desire to care for each other. This is an indicator we look at before exiting communities! Why? Because FH wants to see communities become more resilient. That means that as relationships grow, communities initiate and accomplish projects, and families achieve stable incomes and access to resources… Resilient communities recover when hit by challenges. Even when FH is no longer there to offer support.

After 50 years of work, in 2021, FH is asking the question: Can we help people develop a deep and abiding sense of resilience so that they can absorb and respond to challenges, emerging even stronger than before? We want communities to grow sustainably, turning adversity into opportunity.

None of us are born resilient. Babies are so vulnerable! Resilience is also not something that springs up overnight. Rather, it is cultivated. It grows slowly. At FH, our work is about helping communities develop that resilience over time. We help them create ecosystems in which families work together, children access support, and everyone achieves their goals.

That is why our goal for communities is never self-sufficiency. No flourishing community is self-sufficient. Rather, thriving communities are deeply connected. With neighbors working together, leaders growing networks within their larger region or country, and the whole community connected to bigger economic and social systems that offer support. This creates reservoirs of deep social, spiritual, and economic resources to draw on in times of crisis. And because FH enters communities with an exit plan, our goal is to leave with communities harnessing those resources far into the future.

Since 1971, FH has worked with community members to meet the most deeply-felt needs of families. We have always had a focus on serving those in extreme poverty and the households that are the most vulnerable in any community. As we look forward to a bright future ahead, we look forward to seeing more relationships restored, walking alongside community leaders, and witnessing families emerge more resilient than ever before. Until all forms of human poverty are ended worldwide.

Celebrate FH’s 50th anniversary by watching the video below!