Food for the Hungry is our name for a reason. From the very beginning 50 years ago, FH has responded to disaster situations in some of the hardest places on earth. Food distributions play a big part in many of these relief efforts in the wake of hurricanes, earthquakes, displacement and refugee crises, and other kinds of emergencies.

This is why, as organizations around the world celebrate World Food Day on October 16, FH also wants to thank you and those who who pray and give to empower food distribution and other hunger-fighting efforts.

World Food Day is all about raising awareness for the struggles that vulnerable children and families face due to food insecurity and the fight to end it. FH’s compassionate partners like you help to make this possible by:

Consider, for example, the impact FH food distribution efforts are making in Mozambique, where terror attacks displaced many children and families like Maria and left them hungry.

Hungry for Food and for Hope

Maria is 18 years old, still just a kid herself. But in the chaos of a horrific terror attack on her village in Mozambique, the uncles and cousins she lived with disappeared. They might have died or simply fled in a different direction. She has no way of knowing.

In that instant, Maria found herself simultaneously the “head of household” for her 11-year-old brother, 5-year-old sister, and 7-year-old niece and homeless.

But even after fleeing to safety in another Mozambique community, Maria and her family’s fight for their lives was far from over. They had no clothes but those on their backs, no shelter, no blankets, no money or other resources, and most pressing of all: no food.

They foraged for anything at all to put in their bellies, relying on wild fruits and the goodwill of neighbors to get by.

“We were really stressed to the full,” Maria remembers. “Imagine having run from the insurgents and having to face hunger. It was like being thrown from the pot directly into the fire.”

Thankfully, God made a way. 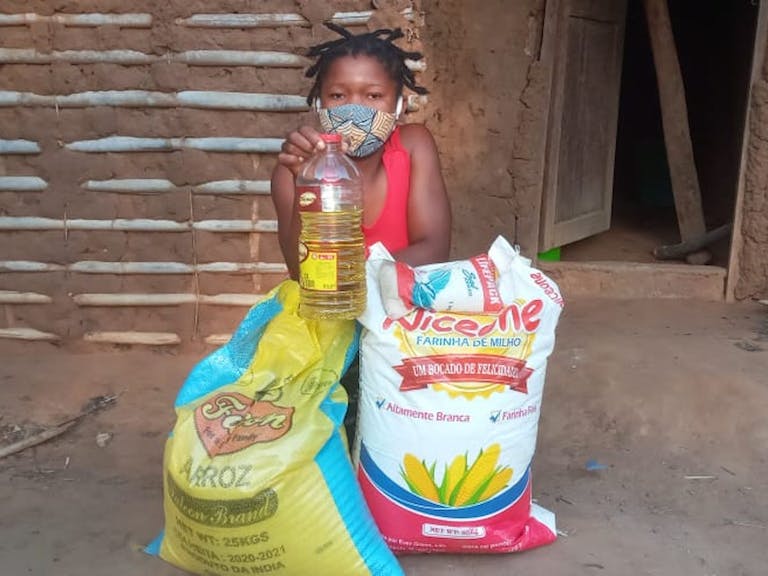 Maria with some of the food her family received through the FH food distribution.

Together with the support of partners like you, FH acted quickly to rush the basics displaced families like Maria’s needed right away.

Maria felt relieved. After all she had been through, a new hope rose up inside Maria’s heart when she and the little ones in her care received emergency nutrition items like rice, cornflower, and cooking oil, as well as hygiene kits, shelter kits, and other aid. With the essentials for survival covered, it finally seemed possible to survive and, one day, to thrive.

What’s more: Maria is already sharing her new-found hope with others.

As one of the few displaced people in her community who can read, Maria has taken on the responsibility of making roll calls on food distribution days. What a delight it must be to Maria to know that as she reads each family’s name and hands them their food, they’re filled with the same peace and joy she experienced. 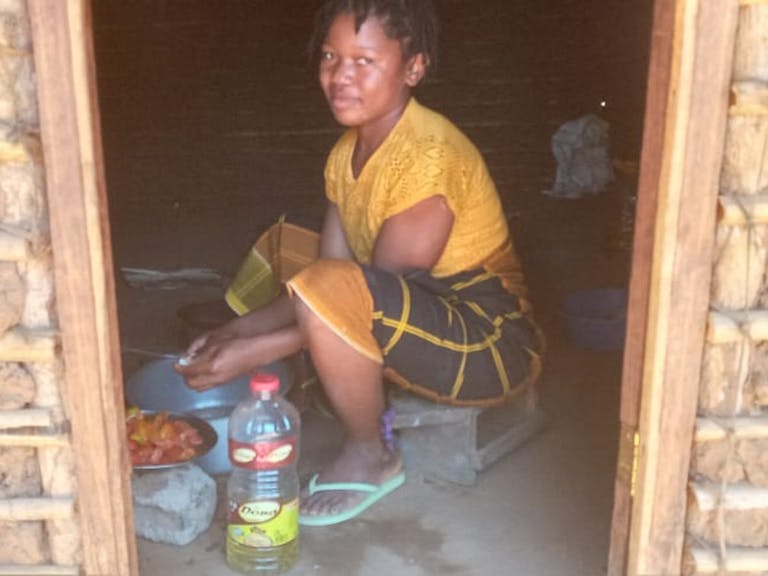 Food distributions are an important component of relieving hunger in the immediate term. But they also open the door for long-term solutions.

For Maria, receiving food kits gave her some breathing room to think beyond the urgent needs of today. Instead of spending all of her time scavenging for food for the nightly dinner, that need is now covered. As a result, when FH offered seeds, hoes, gardening training, and other opportunities to grow the food that will feed her family herself in the future, Maria was able to look to the future and say “Yes.”

Now, Maria has hope. Her family has food to eat every day. She’s sowing seeds for rice, beans, and maize that will sustain the family into the future. And she’s even starting to dream. Her heart’s desire right now? “Build a brick house and stay here forever.”

God Hears and Answers Us

Rebuilding After Two Hurricanes in Nicaragua