Who would want to gift a goat to anyone? Goats have such a reputation for bad behavior, even Jesus called them out.  In Matthew 25, Jesus likens Judgement Day to a shepherd separating the sheep and the goats. The sheep go right, the goats go left. “Then he will say to those on his left, ‘Depart from me, you who are cursed, into the eternal fire prepared for the devil and his angels (NIV),'” says Jesus. Goats have had a bad reputation for a long time.

And goats are manure machines. A well-fed goat in Burundi, where Food for the Hungry (FH) often distributes goats, can produce over a pound and a half of manure each day. (For a 160-pound human, the average is about 1 pound per day). What a mess.

Yet there are people in this world who would do anything for a nasty, messy goat. Like Anselme, a husband and father of five from Burundi.

Anselme’s children, including his son Roy who is a sponsored child, were “usually ill,” he says. Their small farm plot didn’t yield much. They didn’t have food in sufficient quantity. And they didn’t eat many vegetables either, so the quality of their diet was poor. The school-aged children missed class because they were sick. “I used to spend much time lined up at the health facilities to get my children treated, which worsened my household life,” says Anselme.

Some people could purchase manure to use as fertilizer, but Anselme didn’t have the cash for that. He knew that finding a source of renewable fertilizer was key to his family’s health and well-being.

After FH started working with Anselme in 2012, he received the gift of a goat. But the gift didn’t stop with the animal.

Anselme learned how to raise the goat — what to feed it, how to watch for diseases, everything needed to keep the goat healthy. He also learned he should build a shed rather than let the goat roam freely.  That way, he could harvest the manure. 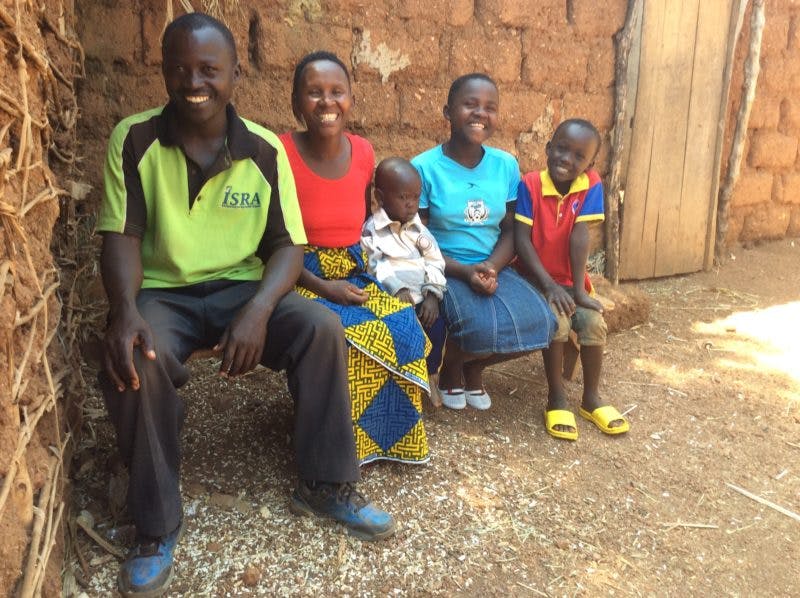 Anselme with his wife and three of his five children.

Gift a Goat; See the Transformation

FH helped Anselme learn about farming in ways that rejuvenated and protected his soil. Applying goat manure was just part of the package that helped him increase his crop yields almost immediately. The family also started growing vegetables to enhance their diets — again, fertilized with goat manure.

Anselme’s children had better attendance at school because they were sick less often. FH staff report that 9-year-old Roy’s health and schoolwork are good and his favorite second-grade subject is counting. Because the crop yields are greater, the family has leftovers to sell. And because of the added income, Anselme reports he no longer has to worry about how he’s going to buy Roy’s school supplies.

But for Anselme, it’s about more than money and manure. “My mind was sharpened,” says Anselme, with the training that FH provided on raising goats and caring for the soil. And he can now dream of a future for Roy and his sister and brothers. “My dream is to see all of my children finishing their university studies,” Anselm says. “And the second dream is to build a big and nice house.”

When you gift a goat through Food for the Hungry’s gift catalog, you don’t just give an animal. You give hopes and dreams. And you help farm families worldwide make a happy, healthy mess!

11 New Items to Give In This Year’s Catalog

We Don’t Ship Sheep But We Do Support Local Economies