Adiye is a 45-year-old single mother of five daughters, who lived a life dependent on handouts. She’s a refugee from South Sudan, now living in northern Uganda. The conflict and violence in South Sudan have taken a terrible toll on so many aspects of life for children and their parents. Schooling ceased far too early; long treks to safety drained the health and life out of them. Once in Uganda, they joined the community of refugees who fighting to survive. They were safer, but not necessarily welcomed in their new home.

“We survived on food rations given by the World Food Program that got finished quickly,” says Adiye. She sometimes found manual labor jobs that paid less than a dollar a day, but the work wasn’t stable. “My children were malnourished because I was not always able to provide three meals a day. When they would fall sick, I was not able to take them to good health facilities to receive treatment.”

Adiye wanted a better life for her children and a way out of feeling like a failure as a parent to her daughters ages 10, nine, seven, five and three. “I felt I was letting my young ones down by not providing them with the basics they deserved.”

A chance to end the handouts

What Adiye really needed was a steady income. And Food for the Hungry (FH) stepped up to help.

First, Aidye started working for cash at an FH-sponsored project that benefited the entire community. Along with others, Adiye helped build garden plots at elementary schools. The project gave her steady work, where she earned a daily wage almost double what she’d been taking home previously. While working, she received training from FH on basic agricultural practices.

For example, Adiye had always planted seeds using the broadcast method — that is, simply scattering seeds. on top of the ground. Then she would wait for them to grow. FH helped her learn how to prepare the soil, plant seeds, keep away weeds and pests, and provide the right amount of water. Her training especially helped her grow vegetables that would provide her young girls (ages 10, nine, seven, five, and three) with better nutrition.

At the same time, her three-year-old daughter Victoria entered FH’s Maternal-Child Health Nutrition program, where her weight and height were tracked to prevent her from slipping into severe malnutrition. 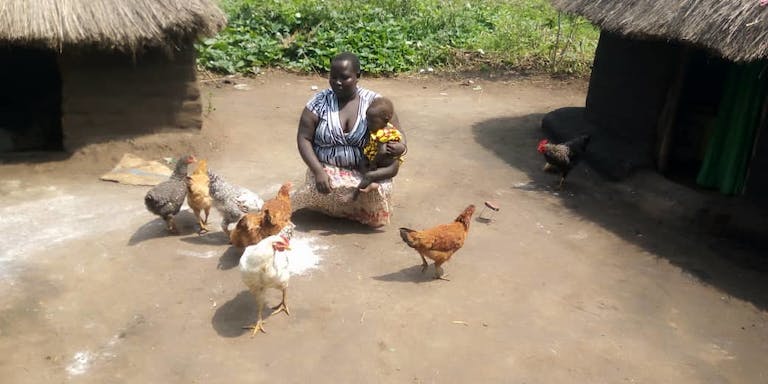 Then, FH provided Adiye with a kuroiler chickens, a special breed first developed in India. They do well in Uganda’s dry climate and are just as good for meat as they are for laying eggs. On the plot of land that the government provided to her as a refugee, Adiye started raising chickens as well as planting vegetables. Her girls had eggs and even meat now!

And with the better meals, her youngest daughter Victoria started to gain weight. She wasn’t suffering from colds and other illnesses as often.

Adiye doesn’t have any goats….yet. That’s part of her dream for the future. By selling chickens, she hopes to save enough to buy goats.  By selling goats, she hopes to buy oxen to help her plow her land. Extra income can be used to pay school fees for her daughters.

When supporters like you give to FH’s 22x matching grant fund, people like Adiye can start to envision a better future. For Adiye, the opportunity FH supporters provided was more than just money in the bank. While food distributions were vital for survival for a time, Adiye is now happy to meet her family’s needs. “I used to just wait for handouts from the UN refugee program and other organizations, but with the financial independence I now have, I’m able to provide for my family,” Adiye says.

How You Changed a Life with One Goat