Have you ever wondered whether you are poor? It’s not a simple question to answer, since definitions vary greatly.

According to one online calculator, a family of four earning $26,000 per year is richer than 78.5% of the world’s population. However, according to guidelines used in the United States, that same family falls below the poverty line.

So, which is true? And if both are true, does that mean poverty is relative? Does the poor family in the United States truly qualify as a rich one in the rest of the world?

Perhaps defining poverty solely on the basis of income is misleading. Is there is an even broader measurement of poverty than economic status?

At Food for the Hungry (FH), we work with people around the world every day who undeniably live in poverty. But, when we speak of poverty, we think beyond possessions and physical resources.

What the Bible Says

This year, as we celebrate FH’s 50th anniversary, we are taking the opportunity to look back at Scripture passages that were especially meaningful to our founder, Dr. Larry Ward. Of all of these passages, this was his favorite:

“This poor man cried, and the Lord heard him and saved him out of his troubles.” Psalm 34:6 (TLB)

Dr. Ward was quoted as saying, “I guess mine is a different kind of world from that which most people know. But this same wonderful God is available to any other ‘poor man’ (or woman) willing to ask for His help. The greatest experiences of my life have come out of a deep personal sense of inadequacy, when I just had to cry out to Him because I needed His help so much.”

The Poverty of Needing God

Dr. Ward understood poverty not only as a material issue, but as a spiritual reality. Although he never lacked resources in the way of many of those that he served around the world, Dr. Ward thought of himself as a poor man in need of God.

Many FH staff share a similar view. Mizanur Rahman, a Program Director for FH in his home country of Bangladesh, has served the organization for 31 years. He says he discovered early in his career that poverty is not only about a lack of resources.

“FH helped to shape my worldview as well as my spiritual pathway,” Mizanur said. “When I came to FH as a community worker, I learned the root causes of poverty.”

The Roots of Poverty

As FH understands poverty, the presence of sin in the world leads to broken relationships, which are the root causes of all kinds of poverty. We also understand that poverty is much more than a lack of material possessions.

“I think I can define two main categories of human poverty,” explained Mizanur. “One is material poverty and another spiritual poverty. In material poverty, there are many sub-groups, such as physical, social, mental, and emotional. God wants to save us from all kinds of poverty.”

The God Who Rescues From Poverty 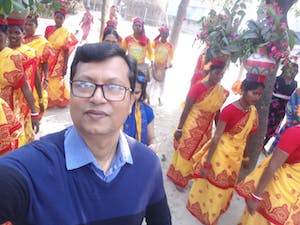 Mizanur, seen here at a community celebration in Bangladesh, has served with FH for 31 years.

When Dr. Ward referred to himself as a “poor man,” he was not referring to a lack of money or things, but about his status before God. He wrote, “If there’s one thing about my life which is worth telling, it’s the story of the great God who has always been there to listen when I cried out to Him in Jesus’s name.”

Mizanur echoes Dr. Ward’s words for his own life. “A person can be physically wealthy, but if he does not have a relationship with God, I think he is spiritually poor,” he said. “I have learned that by being born, I’m a sinner – and I can only overcome that sin by asking forgiveness from God.”

Have you considered your own poverty before God? Take a moment today to tell Him how much you need him!

More from this blog series:

What is the Meaning of “God Gives Food to the Hungry?”

What is the Meaning of “the Ends of the Earth?”