How Intergenerational Learning Led Me to K-Drama

I’ve spent 20 years in school, all the way up to an MBA, and did well in classroom settings. But right now, I’m really loving learning through intergenerational learning — where my peers of all ages are my teachers, and the laptop and TV my textbooks. A recent news article caught my eye about Asian girls getting eyelid surgery. According to the post, young women are copying the wide-eyed look of female actors starring in something called K-drama. I’d heard of Korean pop or K-pop, the worldwide music, dance, and video phenomenon. But K-drama?

Curious, I Slacked my younger coworkers. (Translation: I used computer software to send a group message.) To my surprise, after I had hit “send,” the comments rolled in immediately.

“You haven’t watched K-drama?”
“It’s a huge phenomenon!”
“Here are some shows you have to check out!”

And a list of videos filled my screen–my homework for the night. Turns out, Korean dramas are popular worldwide. Similar to how we think of Spanish soap operas or American Western movies, K-dramas are an iconic part of the culture. Oftentimes, K-dramas are set against a historical backdrop or centered around a love story. And yes–they’re full of drama.

That night on Amazon… 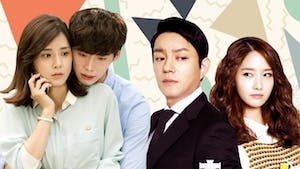 So much K-drama in one photo! (credit: spot.ph)

I decided to watch some K-drama on the TV set through my Roku, which allows me to stream content from my phone directly to the television. It turns out that holding up an iPhone to watch TV for long periods of time, like the kids do, aggravates my middle-aged back problem.

To be an intergenerational learner, you have to start somewhere, and just dive in. Even between generations, it can feel like there are different norms to language, what’s “cool” and what’s not, and even like a foreign world. On my first go-around, I went through six episodes of Love, Lost in Memory. The show is about a brain hacker who can tap into the thoughts of an aspiring actress’ past life. Love, Lost in Memory was at the top of my Amazon Prime Video search results, so I hit play.

An hour later, I was lost in K-drama land. I loved it! Each episode was a short snippet of the larger story, no more than 10 minutes long. It was perfect to watch as I was multi-tasking. I’d watch a bit, then wash dishes. Watch some more, then vacuum. Or call my sister.

Since that first foray, now I’m waiting for Descendants of the Sun to come on some channel that doesn’t cost me anything. I’ve also been told “Love, Lost in Memory” gets really serious, and I should check out “Cunning Single Lady because it’s funnier.

I feel like I’ve unleashed a whole new world of cozy afternoons, with tea and an afghan.

Everyone Wins with Intergenerational Learning

Our culture tries to divide us by generation. But that division costs us so much. Instead, surrounding ourselves with diverse friends helps us cast off our cultural bubble. Having friends of different ages not only teaches us, but ultimately leads to greater empathy, connectedness, and a sense of community.

Food for the Hungry models intergenerational connectivity and learning in our worldwide programs. Instances like these taught me the importance of having important relationships outside of my age group:

You don’t have to be an FH staff member to participate in intergenerational learning. When you sponsor a child, for example, you’ll hear in letters about how a child lives in a country that maybe you hadn’t even heard of. In fact, child sponsorship is a great way to develop a 1:1 relationship and learn about day-to-day life in another part of the world. Plus, the sponsored child will benefit from learning about the world through your eyes, as well. Meaning, on top of providing basic necessities like food, clean water, education, and medical support, you can help a child to dream and have a vision for a better future.

As for my K-drama watching, maybe I’ll try Bollywood movies next. Any suggestions?

How Leading by Faith Is Changing Cultural Norms