What is the Meaning of "the Ends of the Earth?"

Have you ever felt as if you were at “the ends of the earth?” Maybe you were physically far away from anything familiar to you. Or perhaps you felt terribly distant–spiritually or emotionally–from God and others.

Where can we turn when we feel isolated?

Dr. Larry Ward, who founded Food for the Hungry (FH), kept the following words written in the flyleaf of his Bible:

“For wherever I am, though far away at the ends of the earth, I will cry to you for help. When my heart is faint and overwhelmed, lead me to the mighty, towering Rock of safety.” (Psalm 61:2, TLB)

When we think about being isolated today, we are usually referring to metaphorical isolation. In our connected era, it’s hard to imagine finding any place “off the grid.” But for Dr. Ward, it was a reality.

The Ends of the Earth

Fifty years ago, when FH was founded, Dr. Ward frequently traveled overseas to some of the world’s most devastated and forgotten places. He often traveled in response to natural and man-made disasters, increasing his sense of isolation. 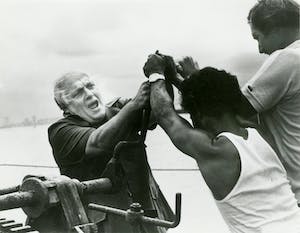 Imagine traveling to these remote locations in the aftermath of disaster, when even basic infrastructure such as power lines and telephone access may have been down. No wonder Dr. Ward cried out with the psalmist, “Wherever I am, though far away at the ends of the earth, I will cry to you for help.”

Crying to God for Help

Today, FH staff members continue to work with people in some of the world’s most vulnerable places. One such person is Debbie Toribio, FH Country Director in the Philippines, who retired this month after more than 30 years of service.

We asked Debbie about a time when things seemed hopeless and she cried out to God. She told us about the devastation caused by Typhoon Xangsane, which struck the Philippines in 2006. 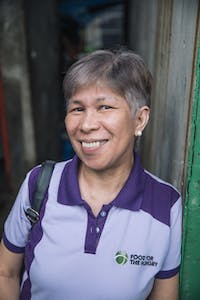 Debbie Toribio, FH Country Director in the Philippines, retired this month after more than 30 years of service.

“Damage was widespread,” Debbie said. The typhoon had passed directly over the densely populated city of Manila and its surrounding region.

“We lost power and water, while overflowing rivers caused flooding and landslides, making roads impassable. Electricity was cut off for up to six days. Many trees and billboards were toppled. Rough waters and seaport closures left many people and vehicles stranded in ports and terminals.”

It was the worst typhoon ever to directly impact Manila. Debbie shared that her own family experienced loss of property and livelihoods, although all remained physically safe.

Calling Out to God

How would you respond in the first moments after a typhoon? Debbie pointed out that prayer is always the appropriate response, but it doesn’t always come naturally.

“The enemy will blind your eyes to God’s goodness and cause feelings of anger, hopelessness, and frustration,” she said. “In the midst of such situations, I thank God that He taught us how to pray.”

After the storm passed, Debbie prayed. She called out to God, and then she called out to the global FH community for help. She mobilized her staff and community volunteers to assess the damage to local communities.

They gathered resources to distribute food, drinking water, stoves, and cooking utensils. While sharing supplies with families, they prayed with them and read Scripture as encouragement.

Recovery from the typhoon took years. Families who lost their homes, farms, and businesses needed help for up to five years with construction materials, vegetable seeds, and school supplies. FH staff also continued to visit and pray with them. They were eventually able to rebuild their lives.

“These families testify that God is indeed their help,” Debbie said. “The trials they encountered were temporary. A new day will shine.”

How Would You Respond?

The psalmist makes a bold request: “When my heart is faint and overwhelmed, lead me to the mighty, towering Rock of safety.”

Has your heart felt faint and overwhelmed? You might not be assisting recovery from a large-scale disaster like Larry Ward or Debbie Toribio, but our life circumstances can overwhelm us.

When you feel as if you are alone at the ends of the earth, ask God to lead you to himself, the Rock of safety.

What is the Meaning of “All Things Work Together for Our Good?”

What is the Meaning of “Act Justly, Love Mercy, and Walk Humbly with Your God?”